The names of Iona and Peter Opie – 'the Opies' – are synonymous with the collection and study of children's folklore. Their work covers both the traditions of the nursery passed from adult to child and those of older children passed primarily among themselves. The Opies’ numerous books were widely read by the general public and by academics. They helped to establish childhood culture as a serious area of study and are still regarded as essential reading today.

Iona and Peter married in 1943. When expecting their first child the following year, they became fascinated by nursery rhymes and began to research into their history. In time they compiled The Oxford Dictionary of Nursery Rhymes (1951) which traced both the history and variants of 550 nursery rhymes and is still the classic work on the subject.

“It was when we were walking along the path beside a nearly ripe field of corn that our future was decided by a ladybird. Idly one of us picked it up, put it on his finger…and said to it: “Ladybird, ladybird, fly away home, / Your house is on fire and your children all gone.” The ladybird obeyed, as they always do – and yet it always seems like magic; and we were left wondering about this rhyme we had known since childhood and had never questioned until now. What did it mean? Where did it come from? Who wrote it?”

The nursery rhyme research introduced the Opies to the chants and rhymes of older children, a selection of which appeared in I Saw Esau (1947). Four years later, they wrote a letter to the Sunday Times asking for further information. It produced a deluge of responses and led to a network of teachers and other correspondents who distributed the Opies’ questionnaires on ‘The Oral Lore of School Children’ and ‘The Games and Crazes of School Children’. Iona later made tape recordings of children from around the country performing songs and singing games, and talking about their play. She also made regular visits to her local primary school in Liss, Hampshire, making notes on her observations over some years. Iona later estimated that they had received information from 20,000 children over some thirty years (c.1950–1980). 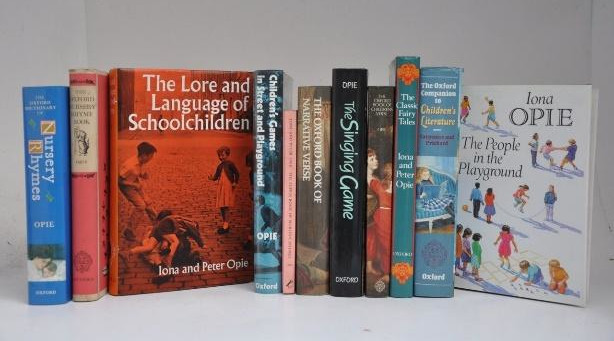 The Opies assembled and analysed this data to produce their now classic books, beginning with The Lore and Language of Schoolchildren (1959) and followed by Children’s Games in Street and  Playground (1969). While working on the next volume, Peter's health began to fail and he died of a heart attack in 1982. Iona completed The Singing Game (1985) and continued to work on the final volume they had planned, Children's Games with Things (1997). She also wrote The People in the Playground, based on her observations in the school playground at Liss.

The Opies also amassed one of the most important collections of children's books in private hands. Following a public appeal, led by Prince Charles, the Opie Collection of Children's Literature was purchased by the Bodleian Libraries. It contains 20,000 titles including books of stories and nursery rhymes, chapbooks, comics and magazines, and educational texts such as primers and alphabets. The Opies published on fairy tales (The Classic Fairy Tales, 1974) and folk belief (A Dictionary of Superstitions, Iona Opie and Moira Tatem, 1989).

The Opies’ work has been recognised in a number of honours and awards, including the Chicago Folklore Prize (1970), and honorary degrees from the University of Oxford (1962) and the Open University (1987).

From the Archive of Iona and Peter Opie, Copyright statement, Bodleian Libraries, University of Oxford.